For the first time on FitLivingFoodies.com, we have a special guest post from our fellow foodie friends (say that 3 times really fast) over at Tasteaholics.com. Vicky and Rami not only share our passion for food, but also for healthy, low-carb and keto-friendly recipes. So you can imagine our excitement when they asked to share one of their tasty creations with us and all of you. While they are more on the traditional ketogenic side of the recipe spectrum we found this particular recipe very fitting for our visitors and their love for fat! After looking over their dessert creation and then trying it, we knew we had to pass this decadency on and we hope you enjoy it as much as we did!

One of the world’s most sought after delicacies!

Crème brûlée translates from French into “burnt cream.” Well when you put it like that, it doesn’t sound very appetizing, but it’s one of the world’s most sought after delicacies. It’s traditionally made with cream, egg yolks and sugar and can be flavored with vanilla, citrus zest, or a slice of pineapple on top (Crema Catalana, ooh la la). The entire dessert is soft and creamy with a caramelized crust on top which adds an amazing contrasting texture! The sugar caramelization was originally done with a hot iron pressed onto the dessert to result in a browned, hard and crunchy shell. Today, the same crunch can be achieved with a small blow torch, or simply a broiler.

If you don’t own a blow torch, or butane fuel (totally common household items) you probably own an oven with a “broil” setting; that’s all you’ll need to make this fancy French dessert! To make this a perfect low carb, ketogenic treat, we substituted the sugar in this recipe for stevia! To create that iconic caramelized crust crème brûlée is known for, we’re using a sprinkle of erythritol. Erythritol is low calorie, low carb and has a glycemic index of 0, the lowest of sugar alcohols. It’s also considered to be the most forgiving of the sugar alcohols when it comes to certain people with digestive upsets. It’s 70% as sweet as sugar, and tastes quite similar. Our bodies don’t digest sugar alcohols so we subtract them from our total carb count the same as we do fiber. Sweet-tooths, rejoice for erythritol and stevia!

However, if you don’t have erythritol, you can sub in a sprinkle of stevia on top, but we’re not sure how that’ll hold up to the broiler caramelization process. The erythritol caramelized pretty well despite the many reviews we’ve read saying that it won’t. Must be a keto miracle! Whatever sweetener you use, make sure it’s your favorite! The crème brûlée will taste great even without the crispy top! 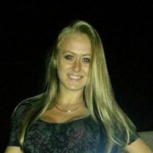 About Vicky & Rami from Tasteaholics

Vicky and Rami own and write for tasteaholics.com, a keto, paleo/primal and gluten-free blog dedicated to teaching people how to cook easy and nutritious meals. Their quick-bites section features recipes that take less than 30 minutes to make! Firm believers of the ketogenic diet, they provide readers with low-carb recipes (desserts too!) that never skimp on flavor. When they’re not making a mess in their kitchen, they can be found working out together, learning Italian or discovering the next delicious restaurant in NYC.